What is Forex, after all? A Beginners Guide!

Forex is an international interbank foreign-exchange market, with it being everywhere and nowhere. Just banks from various countries (and also some other huge financial institutions, let’s call them market operators) trade currencies of various countries with one another. However, the cumulative volume of these operations is tremendous; it is higher than USD 3 trillion! This is what Forex is! Forex is like the Internet – it doesn’t belong to anyone, no one can control it.

The conversion rate of different currencies is always changing; it is fluctuating under the influence of numerous factors. This is what makes the basis for the speculative profit when trading in the currency market. Let’s discuss it further.

*Trading CFDs involves a significant risk of loss and is not suitable for all investors.

In modern World almost everybody is either trading or at least has tried to do it. To better understand the essence of currency trading and its advantages, let’s compare it with regular “commodity” trading. In case of a regular trade you buy a product with your own or credit money, move it (the product) to where it is more expensive and then sell it. Frequently the product cannot be relocated, and a dealer waits for some time until the commodity price significantly grows and only then sells it. This process formula is as follows:
money -> commodity -> money + profit – costs.

The advantage of this business may be getting a high return rate up to 100% (if you luckily choose the right product). However, as trading in the country is developing; it becomes more and more difficult to find products that would allow gaining such a profit, the competition increases, market “overstocking” occurs. Furthermore, a lot of goods have a limited expiration date; they are subject to deterioration and other risks. The product transportation expenditures are rather high even within the country, and on top of that, a lot of logistical issues have to be resolved. In addition, there are rent fees, royalties to governmental and non-governmental institutions, personnel salaries – all of this significantly decreases the profit. Moreover, there is always a chance to buy a wrong product, which then results in selling it for a lower price than it was bought.

To increase the profit there are only two ways – to get a loan and increase the quantity of products (or the assortment) or speed up goods turnover dumping them almost for their unit cost. You will have to pay very high credit interest, and in case the goods are lost, you may lose everything that was securing your loan. As a result, an average store that requires an investment of USD 20,000 to be set up, brings its owner about USD 1,000 per month and constant employment at best. Have you ever dreamt of your own store while watching that kind of a store owner driving around in a new Audi?

What Forex for Beginners is offering is a lot more profitable, effective and safe. This trade formula is as follows:
money -> other money -> money + profit

Gaining a profit in the currency market is based on the constant change of all exchange rates, they are fluctuating, and it is possible to derive profits at any currency movement change.

In the next chapter we are going to discuss in detail how and where anyone can trade foreign currencies of hundreds and million dollars doing that confidentially, momentarily, round-the–clock. That is, we are going to describe the trade technique itself.

How to Conduct Transactions in the Market?

There are a lot of letters from people asking how to trade in Forex market, how to start? Hence, such questions seem to be simple and obvious for most people who have already passed this stage and are working in the market, there is obviously little information for beginners. We are going to talk about it in more detail. But first, let’s focus on Forex market structure.

Like all the other markets, Forex is an aggregate of currency vendors and buyers. They are called Forex operators. These are huge banks from different countries including central banks, the biggest investment companies, pension funds (mostly North-American ones). Operators trade different currencies with each other, conducting transactions. The minimal transaction value (contract, lot) is about USD 1 million. Operators are interconnected into a special network that allows them to carry out transactions instantly. It is essential that no actual money relocation takes place, i.e. if, for example, a Japanese bank buys GBF 1 billion for yen from a London bank, nobody is going to load the money onto the plane to ship it under maximum security to Japan. In fact, why would they? Because in a day (or even in several minutes) the Japanese bank will sell these pounds to a German bank for Euro and the latter will sell it to the London bank for yen. Don’t try to see much sense in this and rack your brains, it is a market operators’ problem. The most important thing now is that a small investor will by no means be able to penetrate this market. But how can they still get there?

It is through intermediaries that make it possible to penetrate that market, how else! Why do banks trade? They are either being directed by their clients or speculating (by the way, it is one of the main profit sources for a lot of western banks). In the last 15 – 20 years the so called brokerage companies have appeared, or brokers, on the one hand, they are clients of Forex operators (banks), on the other hand, they allow small investors to carry out currency transactions in Forex market with relatively small lots (tens and even hundreds of US dollars).

After you have opened a position, depending on the price movement (exchange rate) it will either generate profits or losses. The situation with profits is transparent, but as for losses … If You decide to close a position, the loss will be withdrawn from your account, and to re-enter the market will have to add more money up to USD 1,000. It is rather inconvenient even technically, while you are looking for money and depositing it, according to the “sandwich” law you will miss wonderful market turnovers, accordingly, you will lose an opportunity to earn money. However, there are more risky things. But first, let’s discuss such an important concept as Equity or a floating deposit. Suppose you have USD 1,000 deposit. After opening the lot the price is moving in the right direction for you, and some profit is about to be generated, for example, USD 105. After summing up your profit and deposit, there is USD 1,105. Sometimes there happens a loss, the same USD 105 but with a minus sign, then the equity is USD 895. Equity is quite a real thing, it is the cost of your deposit at this given moment of time, and it will be the amount of your deposit if you close all positions at once. Obviously, if there are no opened positions, the equity equals to the deposit.

Thus, the position is opened, the loss is growing, and equity is shrinking. How long can it go this way? If the loss outgrows your deposit, a broker is going to incur losses, but that should be debarred. That is why there is such a thing called a stop level, we call it “autostop”, when this level is reached a broker automatically closes down all your positions. The value of this level is usually 10-20% of margin, so there will be less than 100 dollars on your deposit after this “autostop”. It is called to burn down a deposit and get out of the market, we won’t allow that. It is always better to close a position than to wait for “autostop”.

Let’s go back, for example, to USD 1,000 deposit. If you didn’t guess the direction and decided to wait out the unprofitable wave (that’s quite a reasonable option, most of the time the market is fluctuating around certain prices), at the position cost of USD 10 you have only about 90 positions left. It is very little, but most probably, you will reach “autostop”. That is, you have no room to maneuver with a very small deposit; we call this game – “claws hanging on the precipice”. It is very hard to work this way, trust my experience, no one has ever succeeded with such an account. More or less calm work starts at threefold or fivefold excess, the normal one (not just roulette) starts at tenfold excess. So, if you are going to work with one lot of USD 1,000 margin, you should have USD 3,000 – 5,000 on your account, USD 10,000 is optimal.

It is important to point out that if a trader is not disciplined, and just blindly repeats his/her mistake, any deposit will be burnt really fast, even if it is a million. One managing director is known to have lost the entire bank. Thus, the margin amount is of great importance for trading, though it doesn’t determine your success or loss.

In the next chapter we will continue considering the relationship between a forex broker and a client and get to know our main thing – our “product”, that is what is being traded in Forex.

It is high time to know the basic terminology and concepts of Forex for Beginners. Some of them have been mentioned before, but it does not matter, repetition will be of use; others will be new for you. These concepts should be well learned and thought over, otherwise next chapters will be very difficult to understand.

Exchange rate – it is the price of a currency unit of one country expressed in currency units of another country, it is used in selling or buying transactions. This price may be set either by the ratio of supply and demand for a certain currency under free market conditions, or it may be strictly regulated by the government decision and its main financial body, usually the central bank.

Direct quotation is the quantity of national currency for one unit of another currency.

Indirect quotation is the quantity of foreign currency for a unit of the national currency. 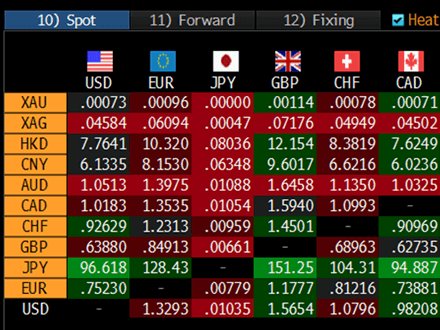 Cross rates
It is an exchange rate between two currencies deduced on their exchange rate against a third currency. When operating in the international market cross rates against USD are usually used, because US dollar is not only a major reserve currency, but also it is the currency for most foreign exchange transactions. The quotation of a suggested currency can be as follows: EUR/USD = 1.0150 Bid (supply price); 1.0155 Ask (demand price). This means that a trader can sell Euros for dollars at the rate (price) of 1.0150 and buy Euro for a dollar at the rate of 1.0155. The difference between the bid price and the ask price is called Spread. In this case it equals to 5 points (0.0005).